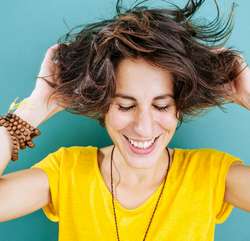 I was born in Strasbourg, France in 1981. Life took me to various cities and places in Europe until my recent arrival in the south of Spain. My work is inspired by travels and landscapes, and marked by the colours of deserts, forests and oceans as well as the movements they bring to the soul. I first followed an academic route and obtained a Master of Arts in Applied Linguistics from Sussex University in 2007 and a PhD. in Cognitive Science and Linguistics from the University of Lyon in 2013. I’m a self-taught  painter and began practicing while I was studying linguistics and semantics. As I was dissecting word meaning and working on its geometric representation, I felt the need to work andexpress myself with other types of languages.

I therefore explored a pictorial, emotional and energetic language, based on the spontaneity and the purity of gesture and colour. There was only a small step from translating languages to translating energies. I showed my work for the first time in a gallery in 2011 and became part of a collective of artists in Villeurbanne (Lyon, France) the “Lost Room”. Later, in 2014, I started working with the gallery Le Point Fort in Strasbourg and was honoured to be the first artist to have a solo exhibition in this gallery set up in a historic fort in November 2014. At this time I decided to create a new artist studio in collaboration, “M33”, within the Junkers factory in Strasbourg. At the end of 2016 I left the studio, which continues to live without me, to commit to an eco-project in Andalusia, and therefore took a creative break. I now come back to my colors, nourished by the vibration of the last oasis in Europe, in the heart of the only european desert.

Artistic approach
My artwork is based on the moment; it is instinctive, intuitive, intimate and experimental. My painting is abstract and organic and mostly based on acrylic paint on canvas, although I integrate a lot of natural elements in my paintings, such as sand and clay, to build texture and vibration. My works are the translation and channeling of energies and states of consciousness with as little intervention of the mind as possible. I am close to visionary art, depicting hidden places in our consciousness. My paintings are always the result of a given energy, that I do not try to control, but to the contrary, preserve, in its authenticity. I paint landscapes of the soul, even though nature is an infinite source of inspiration for me.