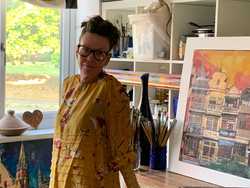 Juli Anne Coward grew up in the Lake District in the north of England. After
leaving school she worked in the textile industry as a spool setter
for a carpet and rug manufacturer in Kendal, and as a sewing machinist
making a variety of garments. At the age of 23 she enrolled at Cumbria
College of Art and Design in Carlisle and studied a foundation course
in Art and Design, before studying Graphic Design specialising in
Illustration in Bath.

She works as a Guild Commended Picture Framer in Leominster in
the county of Herefordshire and she also works as a professional
artist. Juli Anne spends a lot of time in her second home in the Vall
de Gallinera in Alicante, Spain.

Juli Anne’s work has been exhibited at the Greenstage Gallery in
Bishops Frome in the U.K since 2007 and regularly exhibited at the
Affordable Art Fair in Bristol and Battersea in London. She also has
her work exhibited at Galeria Corte Reale in Paderne in Portugal and
at the Lady in Red (lir) Galeria de Arte in Lagoa Portugal. Juli
Anne’s art has recently been accepted for future exhibition at the
Adsubian Gallery in Adsubia in Spain.

A Painting of Bristol Cathedral was used on much of Bristol
Cathedral’s publicity for 2008 and 2009 and also as their Christmas
card for 2008.   Juli was shortlisted for the ‘2008 Canon and Art
Business Today print to win competition’.  Juli Anne has worked on
numerous commisions over the last few years, and  her pictures can be
found on some of the grandest walls in the country. If you are looking
for a commision please contact the Gallery for futher details.

Juli Anne’s art work has been specially selected from a large number
of entries to feature in a forthcoming book to be published in 2021.
This book is the ‘Bristol Art book and is one of a series of books
depicting city images throughout the UK

Artist Statement
“As a  child  I chose to paint the rooftops visible from my parents
window.  I  have always loved painting all kinds of buildings from
ancient to the most  contemporary.   I believe that all buildings have
a certain energy of their own which is independant of the way they are
used by the people who inhabit them.  I do not have a preconceived
idea of how a particular image will evolve, but I prefer to work
instinctively and let the buildings divide the painting into different
blocks of colour.  I will experiment with surfaces and techniques and
I will work with all sorts of media such as  collage, ghesso, plaster,
oils, acrylics and inks.  My dramatic use of colour permeates many of
the pictures I paint.  Colour and lines attract me and as I work I let
the colours bleed into one another.” 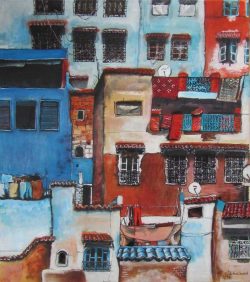 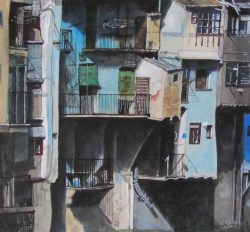 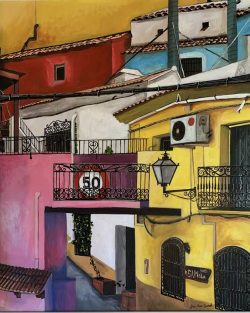